The idea of establishing a museum came up in 2012 when the exhibition 'Zverev on Fire' was held in the New Manege. Halls of the Manege blazed with the glow of a longtime fire that burned down a summer house of the collector Georgy Costakis in Bakovka near Moscow in 1976. The Costakis' house was burning with a vast collection of the works of art. Mysterious circumstance allowed the Anatoly Zverev's works escape that fire unharmed — there were a lot of them.

More than 200 works had been displayed to more than 30 000 visitors at that time. But not only a fantastic revelation of Zverev unseen until that moment was a sensation – the sensation was the exhibition itself, from its idea to its implementation. The display turned into a space full of drama, passion and futuristic concepts, a super-modern time machine, which swiftly teleported Zverev to the present day, and then launched him into tomorrow — towards a completely new understanding of the artist.

The interest of the general public in the Zverev's creativity and personality served as the starting point for the establishment of the Museum.

"The idea of the Museum did not come up artificially — it was a response to the natural movement of people towards Zverev." P. Lobachevskaya 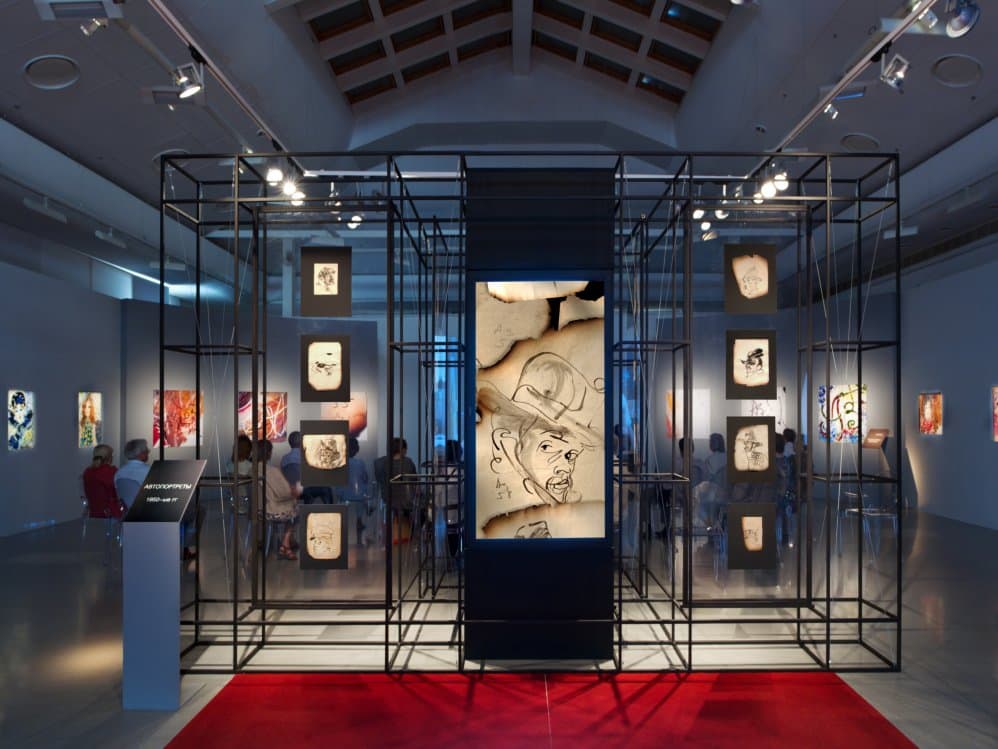 An undertaking of the museum establishment was supported by the daughter of Georgy Costakis – Aliki Costakis, who gave more than 600 Zverev's works as a present to the AZ Museum.

Aliki Costakis explained: "I'm donating these works easily. Same as my father easily donated his collection of avant-garde art. I'm making this gift for my dad, for Tolya. I can't have his works hung here in Athens and invite people to my place for them to finally discover the genius artist. Tolya Zverev needs to be properly shown, to be finally seen in his full strength. Perhaps, I'm taking great liberty saying that the works in the Costakis' collection represent the best period of Zverev, but based on my perception I know: only a few lucky ones ever encounter the greatness of such level." 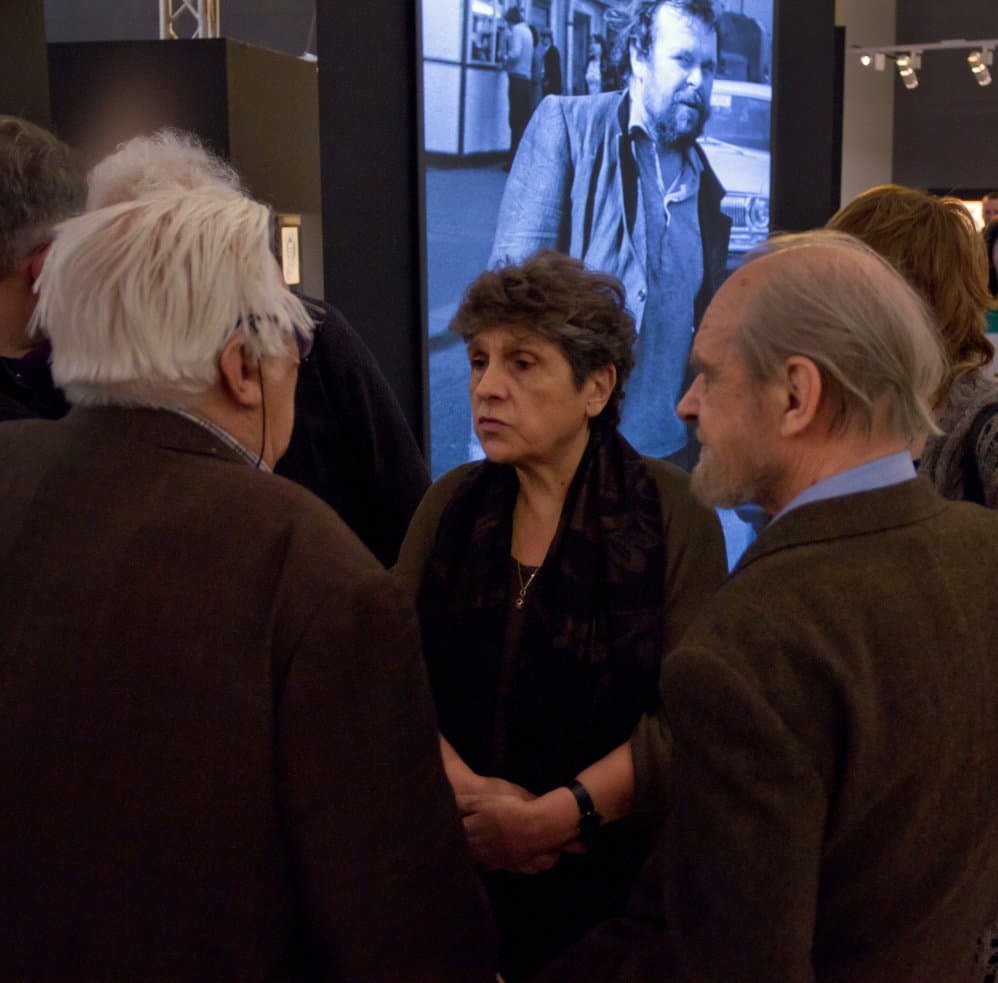 The gift of Aliki Costakis served as the cornerstone of an exhibition, which took place in 2014 and presented the AZ Museum, not yet built, but already existing – “Anatoly Zverev. At the threshold of the new museum.” More than 40 thousand visitors attended the exhibition in just a month.

The exhibition displayed the works of Anatoly Zverev kept in Greece until that moment. The show itself and the arrangement of its space became a concept of the museum, which was gaining its living flesh and blood right in front of everybody’s eyes.

The exhibition displayed all diversity of Zverev, the artist, the personality, the legend. Portraits, drawings of animals, landscapes and still-life paintings, abstract art and suprematism – a never-ending flow of genius art. Zverev in the photographs and aphoristical statements, in the documentaries and memoirs of his contemporaries, profound, sad and ironical Zverev. Multimedia screens seemed a vast sky full of stars woven of his paintings, zooming in and out the eyes, faces and figures in a split second.

The exhibition and the AZ Museum presented Zverev not only as a graphic artist but as a unique artistic phenomenon, who accumulated numerous theories and practices, cultural models, philosophy, poetry and prose and melted them all into his infinite universe. 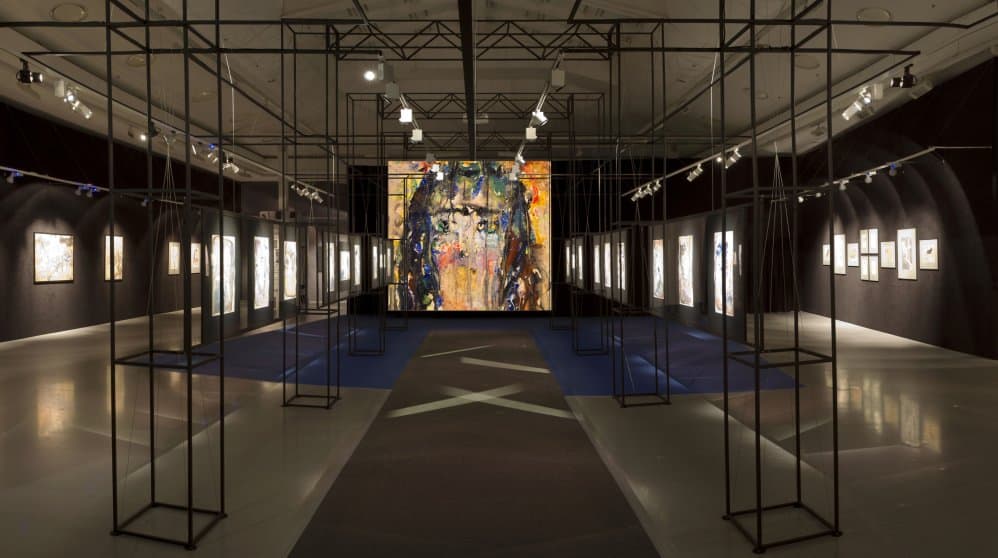 A small three-storey mansion hosted inexhaustible Zverev's universe in the 2-nd Tverskaya-Yamskaya Street, where in May 2015, the Anatoly Zverev's museum was opened. Even in this instance, Zverev turned out to be a "Genio Loci" – the museum was established in the vicinity of the art studio of Vladimir Nemukhin, a friend of Zverev, whose place he frequently stayed at.

"AZ - It's Just Me!" May 27, 2015 – November 15, 2015.
The AZ Museum opened up with the exhibition project dedicated to the biography of Anatoly Zverev and those people who surrounded him in the course of his life. The exhibition was divided into three parts: self-portraits of the artist on the first floor, immediate circle on the second floor (portraits of the non-conformists, collectors, his wife and children). The third floor was entirely dedicated to the Anatoly Zverev's muse and the beloved one - Oksana Aseyeva.

"Magic Cage: Shall We Go to the Zoo?" December 8, 2015 – February 28, 2016.
In the 1950s-1960s, Zverev created a virtuosic graphical series in the Moscow Zoo. The project displayed about 80 works of the artist – gouache, watercolours, oil paintings. The exhibition was designed as an exciting game and entertainment. Halls of the show hosted the drawings by Zverev together with the dynamic visual effects and 3-D installations.

“Beauties of the Centuries.” March 28, 2016 – November 6, 2016.
One of the most popular exhibitions of the museum displayed the female portraits of Anatoly Zverev at the different angle and in various combinations: from instant pictures to complicated artistic images, engaging in a dialogue with the past and the present.

“Andersen’s Fairy Tales.” December 20, 2016 – April 23, 2017.
The exhibition was based on the Anatoly Zverev’s illustrations to four fairytales created in 1961. The museum turned into a giant installation, where in addition to the Zverev’s works, the fairytale worlds were created with the art of the present-day artists (Andrey Bartenev, Katya Filippova, Tatyana Badanina).

“Foresight.” Stanislavsky Electrotheater.
The exhibition was dedicated to the 30th anniversary of the Chernobyl Nuclear Power Plant accident. It combined the pictures of a bright representative of the non-conformist movement Pyotr Belenok (from the AZ Museum collection) and the images from the film “Stalker” by Andrey Tarkovsky. 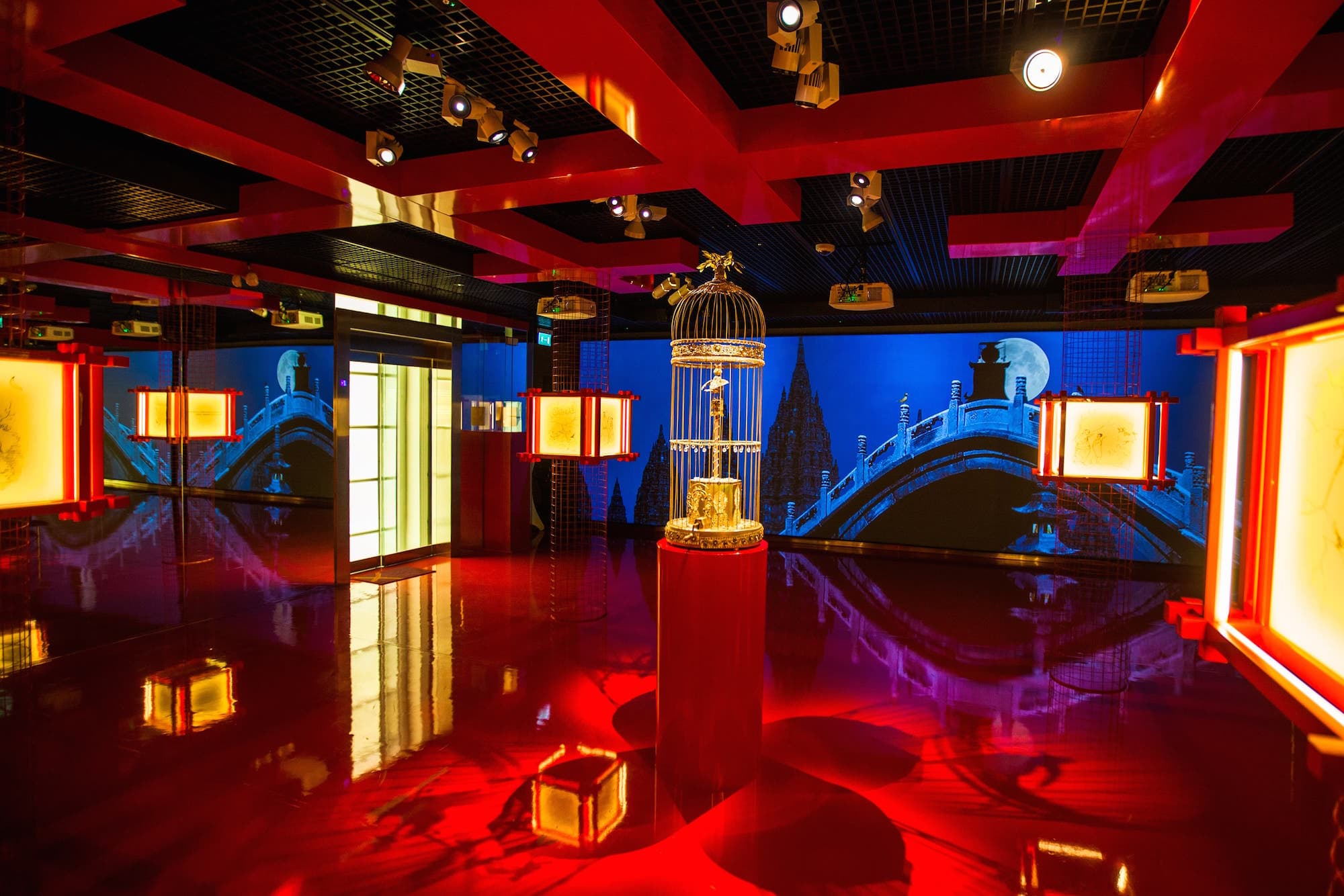 "Game." May 16, 2017 – October 15, 2017.
The museum displayed still-life paintings and abstract works by the leaders of the non-conformist art of the second half of the XX century. These were the works by Anatoly Zverev, Dmitry Krasnopevtsev and Vladimir Nemukhin, who, in the concept of Polina Lobachevskaya, were united with the theme of a game in life and art. The project was joined by the modern artist Platon Infante – an innovator playing in the virtual space of the XXI century.

"Don Quixote's Attack." November 24, 2017 – March 25, 2018.
Don Quixote is one of the key images in the art of Anatoly Zverev. The museum displayed the landmark works of the artist created in the 1960s-1980s. All of them were presented in the context of the global art, with the centre stage given to 12 inscribed lithographic pictures of Salvador Dali from the book "Don Quixote".

"Breakthrough into the Past. Tarkovsky and Plavinsky." New Venue of the Theatre of Nations. June 2017 – July 2017.
In the year of the 50th anniversary of the film "Andrey Rublev", the AZ Museum together with the "Two Andreys" Fund created an exhibition combining two globally-recognized artists of the XX century – Andrey Tarkovsky and Dmitry Plavinsky.

"To You – a Hundred Years After…" Russian State Archive of Literature and Art. November 15, 2017 – April 2018.
The AZ Museum acted as an initiator and partner in the creation of the project, dedicated to the 125th anniversary of Marina Tsvetayeva. The exhibition combined the name of the great poet (the show presented the most valuable things of Tsvetayeva) and the artist Lidia Masterkova. 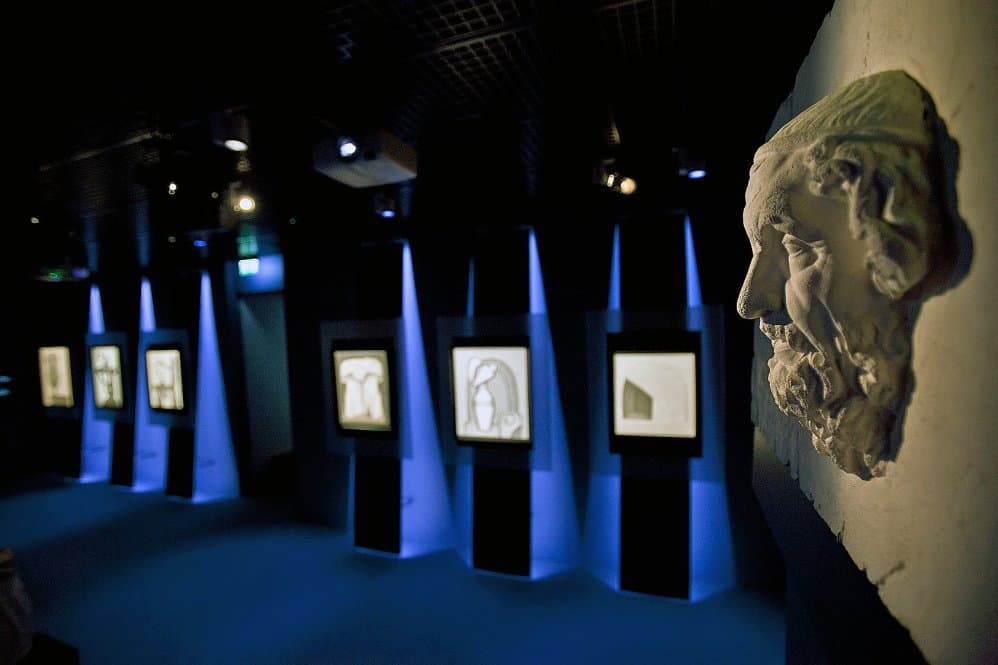 "Zverev-GALA". April 19, 2018 — February 24, 2019. The 7th exhibition project was prepared specially for the three year anniversary of the AZ Museum. Diverse and well-organized, it demonstrated marvelous facets of the talent of the art of Anatoly Zverev. The exposition, unfolded on three floors of the Museum, included over 250 works of different genres — portraits, landscapes, abstractions, series of suprematist works and illustrations. The major emphasis of this exhibition was the incredible diversity of the Zverev oeuvre.

Projects in other venues:

"New flight to Solaris. New trajectory". October 13 — December 31, 2018. At the beginning of September, the first international project of AZ Museum finished in the Franco Zeffirelli Foundation (Florence). The exhibition integrated works of great Russian artists of the second part of the 20th century with the imageries of Russian film director Andrey Tarkovsky. It generated a tremendous response from the side of Mass Media, expert field and also from the public. The unusual nature of the project and its innovativeness became the reasons why "New Flight to Solaris" gained the new trajectory at the new space. 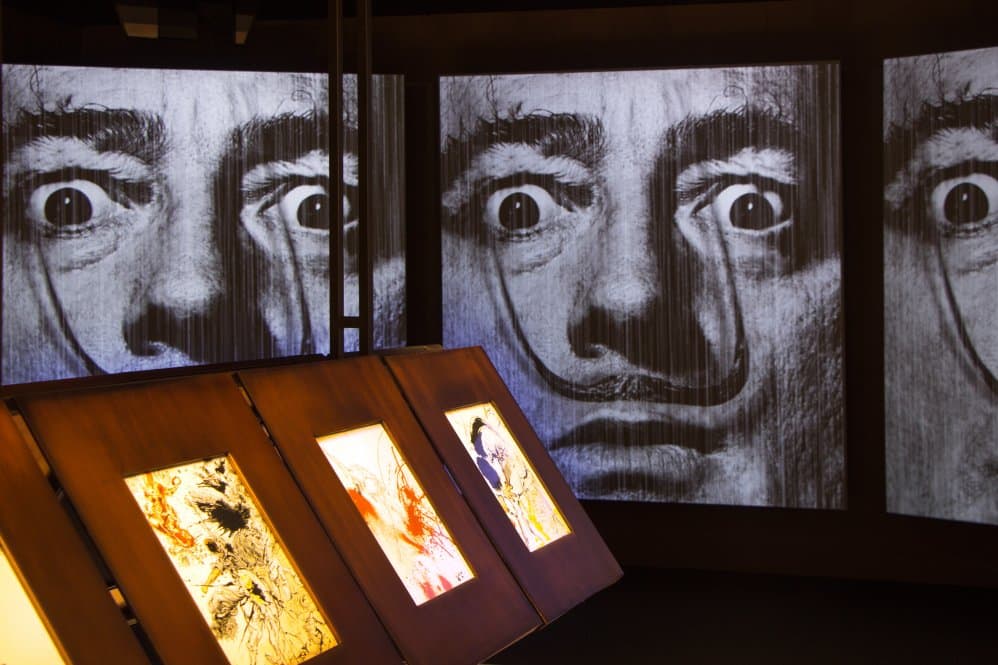 "Winged-troika and Its Passengers". March 19 — August 18.
The project unified Anatoly Zverev’s drawings, etchings by Marc Chagall, and a sculptural object by Vadim Kosmatschof. The sculpture of the Winged-troika that opened the exhibition became the metaphor, embodiment of the way, by which Gogol’s characters race.

"Life and Adventures of Anatoly Zverev". October 25, 2019 — March 22, 2020.
More than 250 drawings and paintings by Anatoly Zverev, taken from the Sweden collection of Dmitry Apazidis, were displayed in the exhibition space of AZ Museum. Dmitry Apazidis worked as a diplomat in Greece, and later in the Sweden Embassy in Moscow. The collector George Costakis, being a friend of D. Apasidiz, introduced the latter to Anatoly Zverev. That is how one of the most significant collections of Zverev’s works started. It includes more than 1500 works of his early artistic life.

"Free Flight». June 21 — September 22.
AZ Museum with the Tretyakov Gallery released an exhibition project in 2019 in the west wing of the New Tretyakov. The exhibition associatively united the names of the great Russian film director Andrei Tarkovsky and his contemporaries — nonconformist artists, who pioneered the Unofficial Art movement in the second half of the 20th century. The "Free Flight" project is a final part of the trilogy, partially presented by the AZ Museum earlier in 2016, 2017 and 2018 — «Foresight» (Stanislavsky Electrotheatre), «Breakthrough into the past» (New Space Theatre of Nations), New light to Solaris (Franco Zeffirelli Foundation, Florence).

"Two Avant-gardes?! Rhymes". September 12 — November 20, 2019.
The exhibition project timed to the Contemporary Art Festival in Ivanovo, included striking works of the avant-guard movement of the 1910s–1920s, taken from the Ivanovo Art Museum collection. The exhibit also presented influential artworks of the Unofficial Art movement of the 2nd half of the 20th century — more than 30 pieces of the "Soviet Renaissance" period from the collection of our Museum. The question mark in the title provokes a discussion: is it correct to talk about the second avant-guard of the 1960s-1970s? What are the criteria that define the artwork as avant-guard?

"Costakis’ Choice". July 9 — November 8, 2020.
New AZ Museum project is dedicated to the legendary collector George Costakis (1913 -1990) who assembled and opened to Russia and to the world the works of the representatives of the first Russian avant-guard. The collector was among the first who started supporting Anatoly Zverev.

"On the Threshold of Paradise". Tatiana Chernova. Ivanovo. March 20 — July 17, 2020.
Citizens of Ivanovo met the spring of 2020 with the AZ Museum project, organized with the "First Avant-guard Factory". It was dedicated to one of the most poetic and multifaceted artists of contemporary times — Tatyana Chernova. Paintings and tapestries presented in the Ivanovo Museum and exhibition center, merge the classical traditions (Renaissance and Baroque painting) with sensitive emotional experiences of today. Tatyana Chernova’s artistic method resembles the "Old Masters": she weaves one rug for months, or creates a multi-meter painting with meticulous brushstrokes. At the same time, all Chernova’s works are imbued with the spirit of the new century.