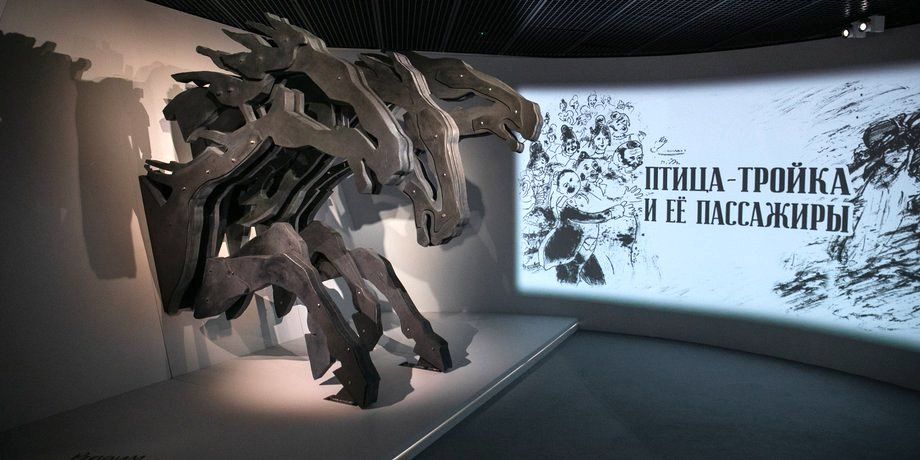 The 12th episode of the online project "AZ Adrenaline" introduces the exhibition "Winged-troika and Its Passengers", having been held in 2019. The project unified Anatoly Zverev’s drawings, etchings by Marc Chagall, and a sculptural object by Vadim Kosmatschof.

At some point, the source of inspiration of the three artists became Nikolai Gogol’s classic "Dead Souls".

Anatoly Zverev (1931-1986) illustrated Gogol all his life. Circumstances did not allow the artist to create a detailed and complete series of drawings. However, the works assembled for the exhibition, demonstrate Anatoly Zverev’s witty and unique method. The majority of these artworks were displayed for the first time.

No less interesting and dramatic was the fate of etchings by Marc Chagall (1887-1985). In 1923, Ambroise Vollard, a French philanthropist and book publisher, appealed to the artist with a proposal to create a livre d'artist based on a literary work. For two years, Chagall created 96 etchings depicting characters and scenes from the poem "Dead Souls". But only in 1948 the work was finally published and received the Grand Prix at the International Biennale in Venice. For the exhibition "The Winged-troika and Its Passengers", Chagall's works were provided by the collector Boris Fridman.

The third participant of the exhibition, Vadim Kosmatschof, is an outstanding Russian artist, who became one of the "harbingers" of the “Soviet Renaissance” in the 1960s-1970s. The sculptor gave his version of the "Winged-troika" by creating a new object especially for the AZ Museum.